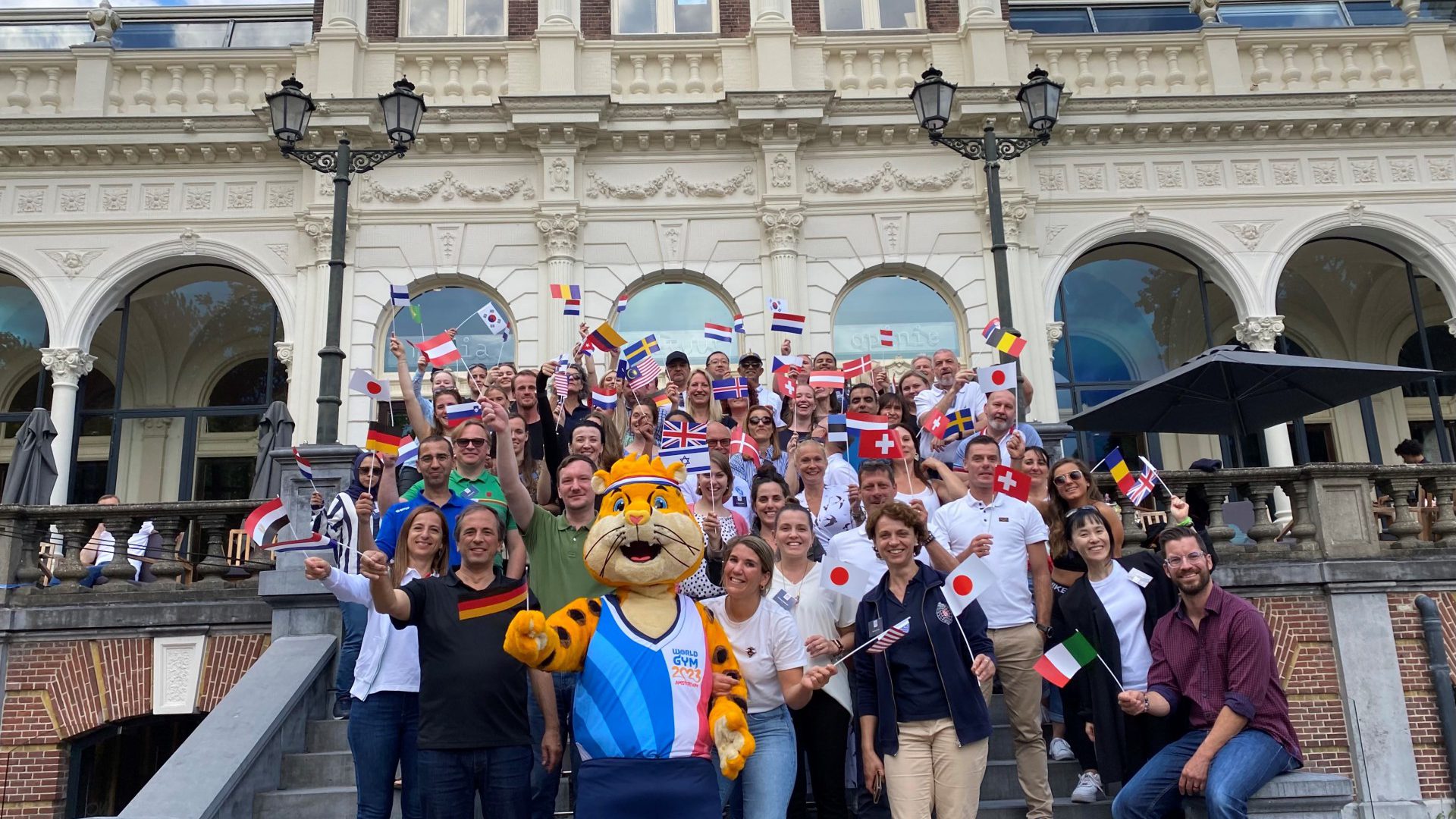 Be amazed! The slogan for the 17th World Gymnaestrada, which will take place in Amsterdam from 30 July to 5 August 2023, is already more than a year in advance. An international group made early July 2022 full of enthusiasm and curiosity about what will happen in Amsterdam. And they were pleasantly surprised.

With less than 13 months to go before the start of the World Gymnaestrada, the FIG Gymnastics for All Committee, the Local Organizing Committee and the Head of Delegations of the participating countries met in Amsterdam. At the end of the weekend, everyone said goodbye, full of expectations about the upcoming event, and with a load of experiences, impressions and knowledge. For the organizations, both in the Netherlands and the participating countries, there is still a long route to the World Gymnaestrada, but it is clear that everyone is very much looking forward to it.

Bianca Wieman, on behalf of the Dutch gymnastics federation KNGU, welcomed the company to the Netherlands. “We are very happy to see each other again after two years of online-meetings. The preparations for the World Gymnaestrada are in full swing, for both the LOC and the delegations. We already notice on social media that it starts to live more and more worldwide. It is wonderful to see how everyone is getting ready for a great event.”

Project Director José Holster and her team gave a number of presentations during the weekend, and the participating countries were given ample opportunity to ask their questions about the topics covered as well as other themes. Holster: “It was, for everyone, a super instructive weekend. Not only for the participating countries, but also for us as an organization. We can already tell you a lot, but the most interesting part is of course the questions that others ask you. It is very good to be able to answer each other’s questions, or to find an answer to them in the coming period. We are now a year before the event and it is good to know which issues are particularly important to the delegations, so that we can provide more specific information about them in the coming months.”

No fewer than 35 participating countries sent their Head of Delegation to Amsterdam. During the first weekend of July they made an inventory of the locations where the Group Performances, Large Group Performances, City Performances, National Performances, the World Team Performance and the FIG Gala will take place. Each delegation, of course, has its own requirements. Whereas Zimbabwe, for example, hopes to come with a group of 20 participants, and Egypt travels to Amsterdam with 85 people, the Swiss delegation will probably number around 3500. Swiss Head of Logistics Stefan Bosshard: “If, like us, you are coming to the Netherlands with a huge group, you naturally want to see everything arranged down to the last detail beforehand. We now have a good impression and can move on. We are already looking forward to it very much.”

Jean Herrel, Head of Delegation for the Belgian team for the second time, is also looking forward to Amsterdam 2023. “It’s good to see the venues, good to get the feeling already. These are the moments when you know there are still things to be done, but when you are also really looking forward to it.”

The group, many of whom had not seen each other since Dornbirn 2019 – due to the pandemic – looked their eyes out in Amsterdam’s Olympic Stadium on Friday afternoon. The stadium was inaugurated in 1928 during the Olympic Games and has served as a sports and events venue ever since. During the World Gymnestrada the opening and closing ceremonies will take place there, as well as the Large Group Performances. Because of the fact that a music festival was taking place there, the delegates were able to get a good impression of the size of the floor and the stands. During the World Gymnaestrada the stands can accommodate about 22,500 visitors.

Saturday, July 2, included a tour of the RAI. This accommodation was in 1991, just like the Olympic Stadium, also used for the World Gymnaestrada. Among others the still empty Hall 1 and Hall 2, which can accommodate respectively 4500 and 6000 spectators, were viewed. Here the National Performances take place. Brasil, Switzerland, Germany, the Netherlands, Japan, Portugal, Italy, PAGU (the Pan-American Gymnastics Union) and the joint Nordic countries will hold one or more performances there during the World Gymnaestrada. The international company moved around the city by public transport each time, which is also recommended for the World Gymnaestrada itself. The RAI and the Olympic Stadium are not far from each other. Amsterdam has an intricate network of subways, streetcars and buses. Participants all receive a GVB card during the event.

During two long mornings of meetings, the organization shared with the participating countries the details that had already been finalized. Naturally a lot of attention was paid to the content of the program in the various halls and the stadium. But they also discussed which equipment would be available to the participants and the delegations received explanations about medical matters, catering, safety, insurance, the registration system and the various communication channels. Gymba, the official mascot of the World Gymnaestrada in Amsterdam, also paid a visit to the meeting – to lighten the day.

In the afternoon several sleeping accommodations, including a school and a hotel, were visited. About 80% of the participants sleep in a school during the World Gymnaestrada. It is one of the specific aspects that gives the event its unique character. The very first edition of the World Gymnaestrada was in 1953 in the Netherlands (Rotterdam), in 2023 the seventeenth edition will be held. The event is coming home, so to speak. Monique Kempff, president of the KNGU: “It is a low-threshold, and very inclusive event. All disciplines within gymnastics, such as dance, acrobatics, gymnastics, are represented. We would love to show the whole world that you can do sports with a lot of fun and are proud that we can organize the Gymnaestrada again in the Netherlands. Everyone is welcome.”

Friday night the foreign visitors could see Amsterdam from a different side. During a cruise through the canals the international group got a good impression of Amsterdam as it developed since the 17th century into a metropolis of modest size.