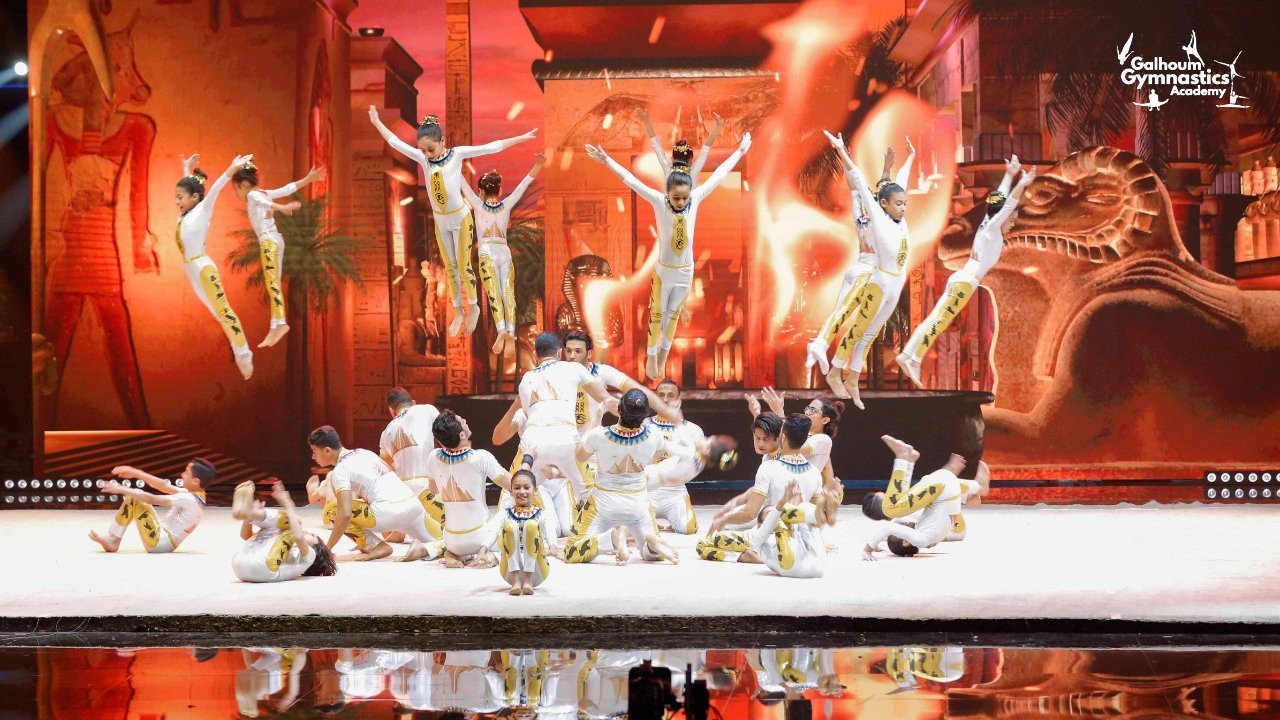 Everyone is already looking forward to it, everyone is preparing thoroughly. Groups in more than 50 countries are working on their performance for the World Gymnaestrada, which will take place in Amsterdam from July 30 to August 5, 2023. In a series of interviews with participants and coaches, we talk about their commitment and passion for the event. In episode 3: Hesham El Nady from Egypt. His country is coming to the Netherlands with a performance inspired by the pharaohs.

Hesham El Nady immediately throws up a ball. “Do you know that the origins of gymnastics might be in Egypt?” Drawings of acrobatic, athletic (gymnastic) exercises have been found on pillars and tablets in temples. Pharaohs probably had subjects entertaining themselves thousands of years ago as they displayed their skills. “You can really see in those drawings the basics of what we now call gymnastics. Nice that we can still pay homage to that now.”

No, this is certainly not the first time Egypt has competed in the World Gymnaestrada. In 5 previous editions of the event, a delegation from the Egyptian gymnastics federation was present. But never came such a large group as the one scheduled for 2023. For example, Hesham El Nady himself, head of the technical committee for Gymnastics for All of the Egyptian Gymnastics Federation, was there in 2007 in Dornbirn. As trainer/coach and participant, of a mere seven-member delegation. For the upcoming edition, however, a company of between 75 and 85 Egyptians will travel to Amsterdam. Hesham El Nady: “So then you are talking about completely different numbers. It’s a big leap forward.”

There’s a reason for that. A good reason. More and more, the Egyptian gymnastics federation is paying attention to Gymnastics for All, gets the non-competitive form of gymnastics support. El Nady is a big proponent of it. “A while back Gymnastics for All didn’t get that much attention in Egypt, hardly anyone cared about it. But now, these days, there is a lot of enthusiasm for it. Okay, for some people it’s still about the competitions, about winning medals, but more and more attention is coming to our discipline. There are events, there are courses and training. When we started Gymnastics for All in 2019, we knew about 150 approximate participants, but now there are already 2,200. And their number is growing. A development is clearly visible. The number of participants is growing, the quality, of the courses, of the staff, of the facilities, is growing. We are able, also thanks to help from the FIG, to train more people. We are really doing our best to get better and better.”

To express that, participation in Amsterdam was only natural. A group of some 75 to 85 gymnasts, who are usually active in the Galhoum Gymnastics Academy but will compete in Amsterdam under the banner of Egypt, trained on a special performance inspired by the time of the pharaohs. “With a modern sauce, the latest techniques, though,” says Hesham El Nady. He guides the group because he knows well what is required of gymnasts during the World Gymnaestrada. The Pharaoh show competed during Arabs Got Talent, among others, even reached far there. “But, the Gymnaestrada is not about winning, not about the chance to win a million dollars. That is precisely what is so beautiful about this event.”

“As president of the technical committee of Gymnastics for All, I supervise, and help them with advice. It’s very important for us to show up at our best. It’s not just some show in Egypt, we’re going to the World Gymnaestrada. That, by the way, is the biggest sporting event, and so we will want to put on a wonderful performance there.” 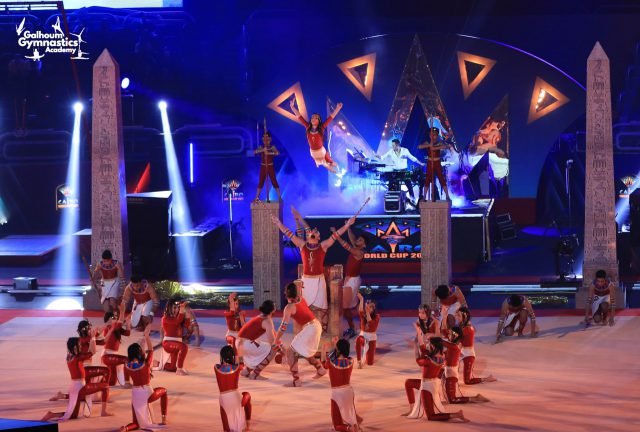 The group from Shibin al Kawm, a town 50 kilometers north of Cairo, consists of athletes aged 7 to 33 and has a lot of experience. So not only did they reach the finals of Arabs Got Talent – thanks in part to a Golden Buzzer at the preliminary rounds – at many festivals and events, they provided the opening act. “Since 2017 the level has gone up every year, now we can really put on something amazing. We are Egypt’s first acrobatic group and play a leading role in the Middle East,” said Mahmoud Zahw. “We would like to show that in Europe as well.”

The group is used to rehearsing, for shows, a new performance in a month or two. But for the World Gymnaestrada, a different, longer process is being followed. El Nady: “We created a schedule in which there is plenty of time to rehearse the exercise, to not suddenly have to train seven days a week, and as many as eight hours a day, with the knife at the throat. Gymnastics for All is also taking the time for something. That increases the enjoyment.”

Because before anything else, for Hesham El Nady, fun comes first. “That’s also what I tell everyone in Egypt: it’s not a competition. It’s about having fun on our trip to Amsterdam, being happy during the preparations. That’s what I gave to the group itself. It is very different whether you are competing for one million dollars in Arabs Got Talent, or training for this event. You have no stress, no worries. Gymnastics for All is about fun, the World Gymnaestrada is about fun. You go there to connect with others, to give the rest of the world a good idea about Egypt. And it’s like, in preparation, you’re in heaven. No stress, you are not pushed. Nobody points a gun at you, nobody will give you deductions because you bend an arm wrong or the knee lift is not high enough. Just make it a great show.” 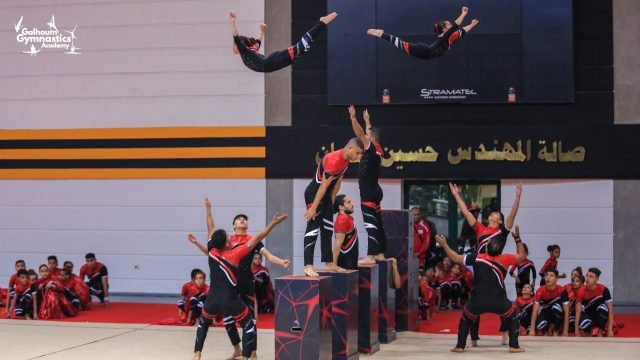 El Nady has yet to regularly explain back home what the World Gymnaestrada is all about. “At the federation, there are still many who look at the medals. I patiently explain to these people that having fun is not a bad thing, on the contrary. Having fun also makes you wiser. You train, get better, learn from others, gain experience. That’s all worth a lot, too. Fun is not just a word, it encompasses so much more. In fact, I am convinced that you learn more when you are not pressured,” said El Nady, who is also spreading that thinking at more and more events domestically. “We already have more and more occasions, festivals, where it’s not about the medals, or where just everyone, as a reminder, gets a plaque.”

The group is very much looking forward to the trip to the Netherlands. “Most of the group have never been outside the Arab world, and are very much looking forward to it. I myself, by virtue of my positions in the sport of gymnastics, including being a judge at international gymnastics competitions, have seen much of the world, and I can tell you from experience that it is a great feeling when you are welcomed so warmly elsewhere. I’m sure this is going to be a wonderful experience. I told them all that the event, with 20,000 participants, is actually even bigger than the Olympics. It’s like the Games, but without the stress.” 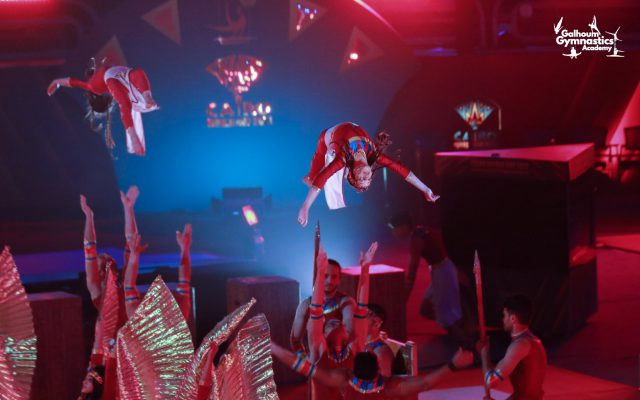