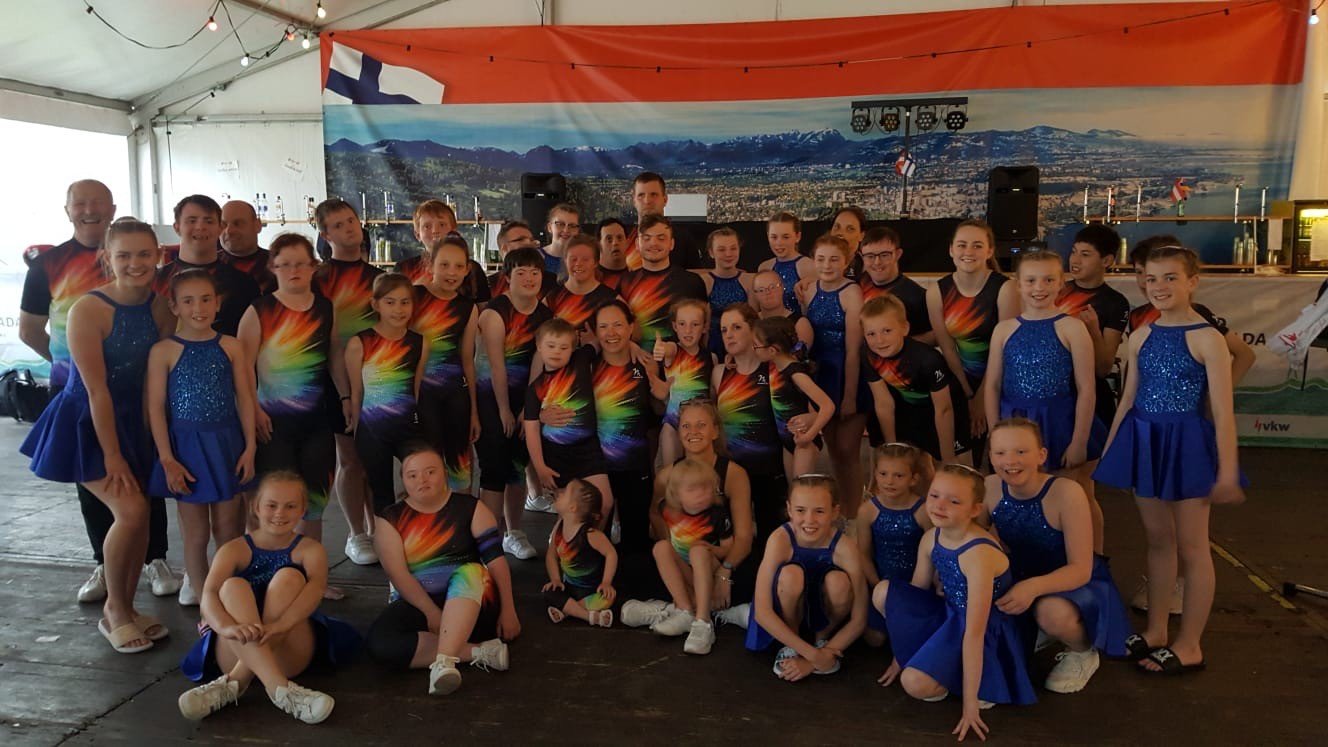 Everybody is looking forward to it, everybody is preparing. In over 50 countries from all over the world, groups are working on their performance for the World Gymnaestrada, which will take place from 30 July until 5 August 2023 in Amsterdam. We are compiling a series of interviews with participants and coaches about their involvement. In this first interview: Dawn Rozzell-Howens of Spartac Gymnastics Club (UK). 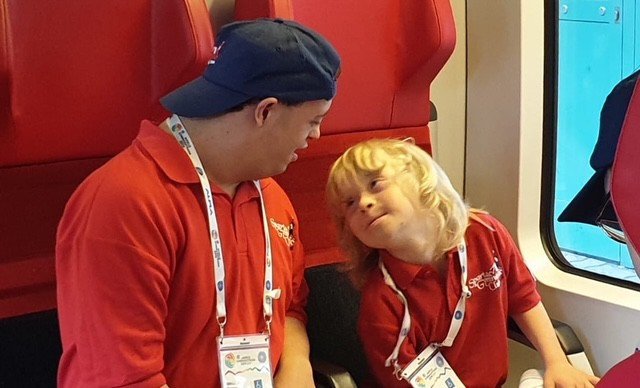 Although there is still a year, Dawn Rozzell-Howens is – to be honest – a bit worried. “There is still so much to do. But in the end, we will manage, like always.” She thinks 12 months is just a short period, because of the fact that the members of her Spartac Gymnastics Club need some extra attention, training for the World Gymnaestrada. Spartac is an inclusive gymnastics team. “And when you say inclusive, it’s really inclusive. Most inclusive clubs have a few gymnasts with disabilities, but at our club it’s the other way around. Our club is set up for gymnasts with disabilities and we include ‘mainstream’ gymnasts. In our display team we currently have four mainstream gymnasts, two of whom are siblings of our gymnasts with a disability.”

“Our delegation consists of 19 gymnasts and 20 coaches/escorts. The gymnasts will perform in both group and city performances. The ratio of coach/escort to gymnast is high because of the needs of the gymnasts. We always have a lot of planning and organization to consider, both before and during the Gymnaestrada. Our gymnasts have a range of disabilities including Down’s syndrome, Autistic Spectrum Disorder and Cerebral Palsy, and of course, some of them are very young. Some of the gymnasts need one-to-one care and we must think about their needs, and about their medication. Travelling is quite challenging, however, with a large group of escorts we can ensure that everyone is cared for and everyone has fun during our trip to the Netherlands.”

Covid-pandemic training wasn’t easy for more than two years. “That’s also why I am a little nervous”, Dawn smiles. “Normally it takes us four years to rehearse the new routine. As you can imagine it takes our gymnasts so much longer to learn new things. We used to practise the new routine only once a week in our facility at Edge Hill University in Ormskirk, Lancashire, but now we use both our weekly opportunities, on Sunday afternoon as well as Wednesday evening. We have to ‘rush’ them through things a little bit more. I think I am more nervous about it than they will be.”

Coaching gymnasts with learning disabilities is of course challenging, but Dawn and her fellow coaches are very determined. “At Spartac your child will be encouraged, together with their siblings, to reach their true potential by applying a developmental strategy specifically designed to meet their needs. Parents can come and watch or become actively involved if they wish.”

Dawn knows what the coaches at her club do is important. “Not only for the gymnasts with a disability, but also for the mainstream gymnasts. We often meet people who have no contact at all with anybody with a disability and they are almost afraid to speak to them. But the mainstream gymnasts in our club have no fear of speaking to anybody in the community. As they train alongside their disabled teammates, they are used to it. Things like that make communities more inclusive, I think that is brilliant.”

Dawn’s son Sam, who is 11 now, is in the group for the World Gymnaestrada as well. In fact, this will be his third time. In Finland he was, at the age of 3, the youngest gymnast ever to represent Great Britain in a big event like the World Gymnaestrada. “He’s already a veteran at his age!” Sam, who has Down’s syndrome has been involved in gymnastics since he was just a few months old, having followed in the footsteps of his mum Dawn, a former elite gymnast, and current silver medalist in the British Veterans Championships, and his grandfather Dave Rozzell, who was British Gymnastics National Coach for Disabilities and former head coach of Spartac Gymnastics Club. Dawn has seen how much gymnastics has helped her son’s development (and that of other gymnasts), both mentally and physically. “Being on the beam, climbing and general jumping skills have helped immensely with his motor skills.”

The youngest gymnast in the display team is 6, the oldest 47. “It’s important to have the young kids involved, it’s about their future, it’s about the future of Spartac Gymnastics Club. It’s not said that the younger ones need more support from coaches than the older. They all need a lot of support. We have to teach them everything in many different ways. To a certain degree you have that with every display team, but this group just needs more support. That’s a great challenge, especially because we always consider who has to support them.”

For the World Gymnaestrada the group has chosen the music of Rag’n’Bone Man. “We have a couple of pieces mixed together. We start off with “Giant”, because that is what we are. We are giants. But most of the routine is to the song “Human”. The music video with that song tells us that we are all different, but at the end all the same. We are all equal, we are all human.”

Coming to the World Gymnaestrada is quite expensive for Spartac Gymnastics Club because the gymnasts need a higher support ratio than mainstream gymnasts. There is, therefore, a lot of fundraising building up to the event. “We do all sorts of things, like sponsored walks, balloon events, auctions, dinner evenings. A lot of the things we do are under the umbrella of the charity, ‘Active Therapy Foundation’, but it’s really all hands on deck, especially as we have also lost two years of fundraising because of Covid.”

Doing the fundraising, and at every other opportunity, Dawn talks to people about how special the World Gymnaestrada is. “I always ask what they know about the Olympics. And then I tell them that there are twice as many participants in the Gymnaestrada, and that all those people perform in just one sport. Then I tell them that it’s not a competition, it’s a showcase. I tell them about our experiences, in the different arenas and at the city displays. I talk to them about the opening and closing ceremonies. I also explain that it’s not a disabilities event, but a worldwide mainstream event happens to be a really good opportunity for gymnasts with disabilities to participate and display their talents”.

“Denmark 1987 was the first World Gymnaestrada where gymnasts with a disability participated. At that time the rules did not allow gymnasts with disabilities, so my dad, as British Gymnastics National Coach, just categorized them as gymnasts and took them anyway. This proved to be a great success and the FIG responded by changing the rules. The FIG is incredibly open and inclusive, welcoming everybody.”

Dawn concludes: “I also talk about the confidence that this experience gives our gymnasts, and the self-esteem they will gain from it. I also explain how emotional it is when you meet people from all over the world, and that language is no barrier. It’s a fabulous event, it’s the pinnacle of our display team’s achievements, and what we work for every four years.” 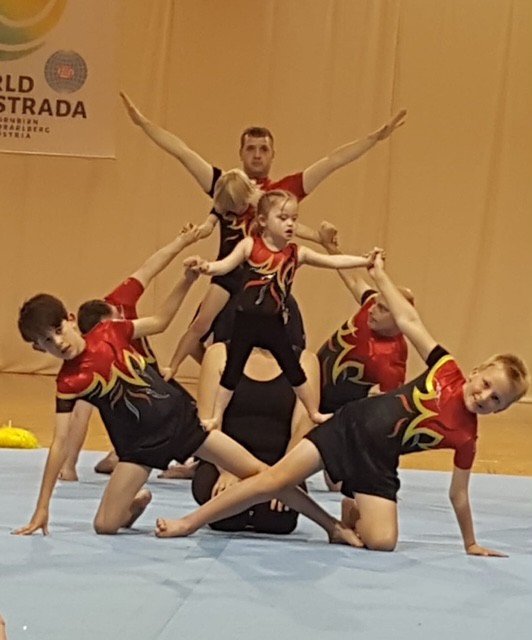